The Nine Worlds of the cosmos (Part 2)

Jotunheim – the land of the Giants

While Asgard was an excellent model of a peaceful, orderly, and desirable place to live among Nine Worlds in Norse mythology, Jotunheim was the contrary.

The Jotunheim was also known as the Utgard. It was the land of the Giants (also the Jotuns). The world “Utgard” had the –gard element just like Asgard or Midgard. This was the concept of innangard (inside the fence) and utangard (beyond the fence). While the innangard place was a wonderful world, the utangard world was chaotic and wild. Jotunheim was a model of the utangard world. It was depicted as a dark place with dense forests and snow-covered mountains.

The giants in Jotunheim were the mortal enemies of the Gods. However, there were times when Gods and giants fell in love with each other like Odin and Jord – the father and mother of Thor. Loki the perplexing trickster was believed to come from Jotunheim, which made him both friend and enemy of the gods.

Niflheim was the place full of fog and mist all the time among the Nine Worlds in Norse mythology. It was the darkest and also the coldest world. The bubbling boiling spring Hvergelmir was located in Niflheim. As the Great Tree Yggdrasil began to grow up, it extended its roots into the land of Niflheim to take the waters from spring Hvergelmir.

Contrary to Niflheim, Muspelheim was a world of fire and heat. The place was full of lava, flames, and sparks. Muspelheim was the land of the fire giants and demons. Their chief giant was giant Surtr, one of the sworn enemies of the Aesir Gods. He held a shining sword to slay gods and his burning flame once engulfed the whole world during the event of Ragnarok.

The very first being of Norse myth, the giant Ymir was born when the ice of Niflheim and the fire of Muspelheim met in the bottomless abyss of Gunnungagap.

Helheim – the Land of the Dead

Deep down under the roots of Yggdrasil lay the world called Helheim. It was the place for the dead and it was presided over by Hel the goddess of death. She was the daughter of Loki and the sister of Midgard Serpent Jormungandr and Wolf Fenrir. The dead in Helheim were said to do all the things that alive humans did: working, eating, drinking, and so on. But they did not feel joy or bliss in the land of Helheim. 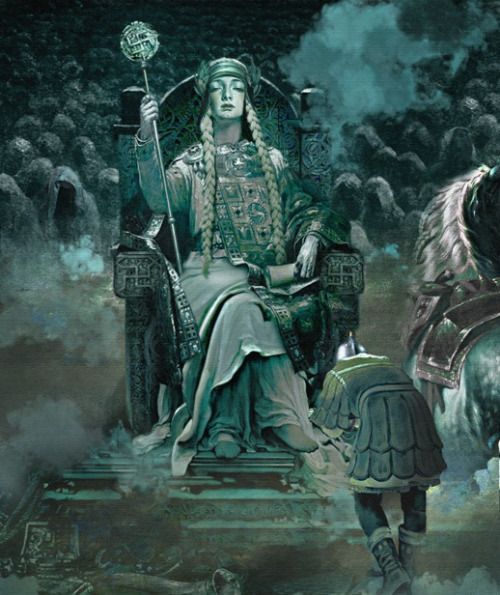 Helheim may be the opposite model when we compare it with Valhalla. While fallen brave human warriors came to dwell in Valhalla with Odin, others came to Helheim with Hel. Moreover, during the event of Ragnarok, Hel joined the giant army led by her father and brothers to attack the gods in their stronghold Asgard. Hel used the dead she ruled in her realm in the Ragnarok – the end of the world.

There are Nine Worlds in Norse mythology. All Nine Worlds situated within Yggdrasil the Great Tree, from its top branches to its deep root.