The Norse belief and tales deeply implanted into the mindset of the Vikings. They worshipped the Norse pantheon and used the Norse symbols as their amulets in life. Of all the Norse/Viking symbols, the twin ravens were one of the most powerful symbols that the Vikings respected. In this blog post, we are going to discuss the Viking Ravens Symbol

In Norse mythology, Odin had a pair of ravens. He called his ravens Huginn and Muninn. The most common scene that we might observe today is two black ravens perching on Odin’s shoulders or whispering something into his ears. And yes, those ravens are Huginn and Muninn of Odin the Allfather. According to many materials, Odin was afraid that one day his ravens would not come back to him. Because Huginn and Muninn were the sources of knowledge and stories for Odin. When the days came, Odin would let his ravens fly around the cosmos to witness everything. When the night fell in, they would return to Asgard whispering into Odin’s ears about the things they had experienced in the Nine Worlds. Thereby, Huginn and Muninn gradually became the mind and thought of Odin. They presented Odin’s presence and mental power.

Indeed, ravens were the iconic and the magical birds in the Viking time. Mainly because ravens were much related to Odin while the Vikings worshipped Odin the most in their belief. The Vikings held a firm belief that the ravens were the ears and eyes of Odin who was the God of War in Norse myth. Thereby, the Vikings would bring any symbol or image of raven into their battles in order to call for Odin’s help. A pair of ravens would mean Odin was there to support and protect them.

Moreover, ravens were also one of the Choosers of the Fallen in Norse myth. They played an important part in deciding who could earn a permission to dwell in Valhalla with Odin. Of course, those who were chosen to live in Valhalla were the bravest warriors who did not survive the battles. This meant the Viking warriors loved to see the sign of ravens in their battles. Because they knew that whatever the results of the war might be, as long as they fought bravely, they would get a seat in the feasting table with Odin.

Like wolves, ravens were one of the most controversial figures in any myth. Because they were unpredictable as nobody could ever predict which side the ravens took and what ravens would do. However, in Norse myth and Viking belief, ravens were respected for many qualities, some of which were associated with Odin the Allfather. 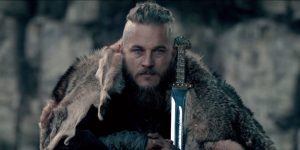